BACK IN THE HABIT.

Our work varies from week to week here in the studio. We often have big projects running alongside smaller mastering and drum tracking jobs. Keeping things fresh is something we thrive upon!

Last week was a little different, though, as I’d been recording at Chem19 over the weekend. As musicians, we find there’s always loads to take away from working with others and experiencing recording from the other side of the glass!

I was drumming for my good friend David’s solo project – Broken Chanter. It was a really fun time and I thoroughly enjoyed being “just a drummer” for a few days. We were working with legendary producer, Paul Savage, who is also a drummer so it was great to take the time to focus on the set up and sound of the kit to suit the album.

Paul had recently acquired a Ludwig Vistalite so I was keen to use that and it sounded HUGE! I, of course, took along a whole load of percussion, snares and cymbals and proceeded to hit anything I could find! 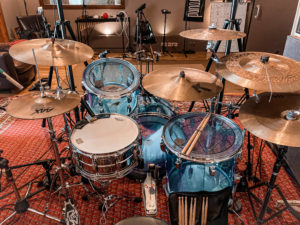 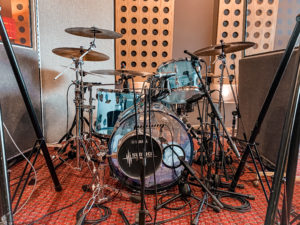 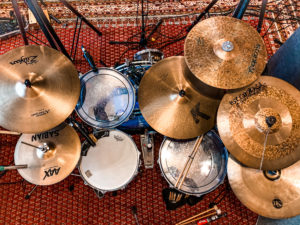 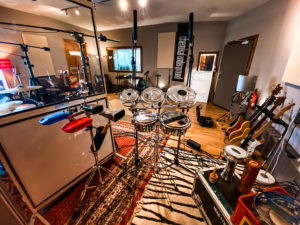 One of the main things I liked about Paul’s approach was experimenting with sounds on their way in. We played with mic placements, delays and distortions which impacted how I then played the part. It meant we had to be decisive. We do that with guitar and bass in the studio all the time but rarely drums so it’s definitely a creative door that has now been opened!

After my venture to deepest darkest Blantyre, I was really excited to get back to sunny and wonderful Cambuslang with all that I’d learned and an unopened pack of Pink Panthers.

Lauren and I had been at some development sessions for a theatre piece with Playwrights Studio, Scotland last month and made space to work on an initial song when we were both back in. We can’t say too much about the project but we wanted to capture a real punky attitude amidst electronic layers. We messed with overdrives and fuzzy effects on everything and committed to the sound! Here’s a taster…

Have a great week! Feel free to get in touch if there’s anything in this you’d like to chat about 🙂